The bicarbonates’ application as chemical leavening agents for baked goods is one of their best known uses. When reacted with an acid or heat, bicarbonates release carbon dioxide (CO2) gas. This aeration causes batter and dough to rise, making for lighter biscuits, cakes, pancakes, cookies and a host of other chemically leavened baked goods. Bicarbonates are an essential ingredient in baking powders, self-rising flours and packaged baking mixes. The leavening function of bicarbonates is not limited to baked goods but is useful in manufacturing hard candies such as brittles, crisps and sponges. The bicarbonate is stirred into hot melted candy immediately before the batch is poured. Carbon dioxide is liberated as the bicarbonate decomposes, forming bubbles which leave an open cellular structure when the candy cools and hardens. As a component of breadings and batters for fried foods, sodium and potassium bicarbonate in combination with an acid will produce CO2 which will alter the texture and crispness of the coating, impact the oil absorption in fried foods and affect the fry color.

Chemical leavening of baked goods occurs in stages: 1) during mixing, 2) while the product awaits baking and 3) during baking. The release and initial expansion of carbon dioxide gas throughout the dough produces the leavening action and establishes grain and structure before the product sets during the latter stage of baking.

As the baking temperature rises, ammonia and steam are released thus increasing the leavening effect. Depending upon the type of baked product, different amounts of leavening are needed at each stage. Pancake mixes require a leavening system that releases nearly half of the CO2 during mixing and standing. On the other hand, cake doughnuts require a leavening agent that releases little CO2 during the mixing and standing stages, and a rapid release during deep-fat frying. Refrigerated doughs should have very little CO2 released during mixing, allowing cans to be packed and sealed.

The baker must select a leavening system that suits the type and form of the end product and the taste, texture and color qualities desired. The rate of reaction is determined primarily by the leavening acid that is combined with bicarbonate. Monocalcium phosphate, a fast-acting acid, will liberate as much as 80% of the leavening gas from the bicarbonate during batter mixing and standing. Sodium aluminum phosphate, a slow acting acid, will react with the bicarbonate as the temperature of the product rises during baking. Combinations of various acids with the bicarbonate will yield a gas release profile suitable for any type of bakery product. The following graph illustrates the different leavening reaction rates which occur when various acids are combined with sodium bicarbonate. 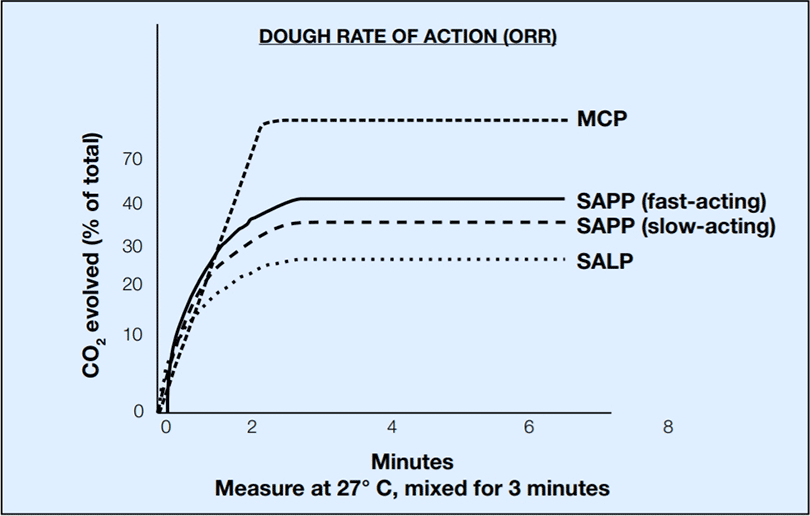