Cakes are leavened in three ways: incorporation of air during mixing, the conversion of formula water to steam in the heat of the oven and release of carbon dioxide from chemical leaveners. The leavening system plays a major role in the development of the traditional characteristics of the type of cake being made.

Cake formulas can generally be separated into three categories: foam, chiffon and batter. The three categories describe differences due to batter appearance or character. The choice of leavening system depends upon the type of cake being produced, the richness or fat content of the formula, and the type of protein that will eventually provide the solid structure of the cake. Cakes low in water and high in sugar and fat generally rely more upon the incorporation of air during mixing to generate texture. Cakes made from lean formulas with higher water content tend to use chemical leavening.

Foam-type cakes depend primarily upon the extension and denaturization of quick-setting egg proteins for the bulk of the structure. These types are mainly thought of as “cakes without shortening” and they rely upon the incorporation of air into the egg mixture for their volume. Two examples of foam cakes are angel food, which relies upon egg whites (meringue) for leavening, and sponge cakes, which use either whole eggs or yolks for aeration.

Chiffon-type cakes are a combination of a batter-type and a foam-type cake. The resulting cake has a modified foam type texture and grain.

Batter cakes depend on eggs, flour and milk for structure and vary in their levels of shortening or fat. For example, pound (butter) cakes rely on eggs and fat for leavening, whereas layer cakes rely more on chemical leaveners because fewer eggs, less fat and more water are used in the formula.

Sodium bicarbonate is typically used in conjunction with a combination of a fast-acting leavening acid such as monocalcium phosphate (MCP) and a slower, heat-activated leavening acid such as sodium acid pyrophosphate (SAPP). This leavening system releases carbon dioxide in a controlled way, creating gas pockets in the batter. These pockets are preserved as voids as the proteins warm, extend and gelatinize during baking. The leaveners provide volume to the cakes that impacts cell structure, “bite,” finished product pH, crumb color, crust color and taste. 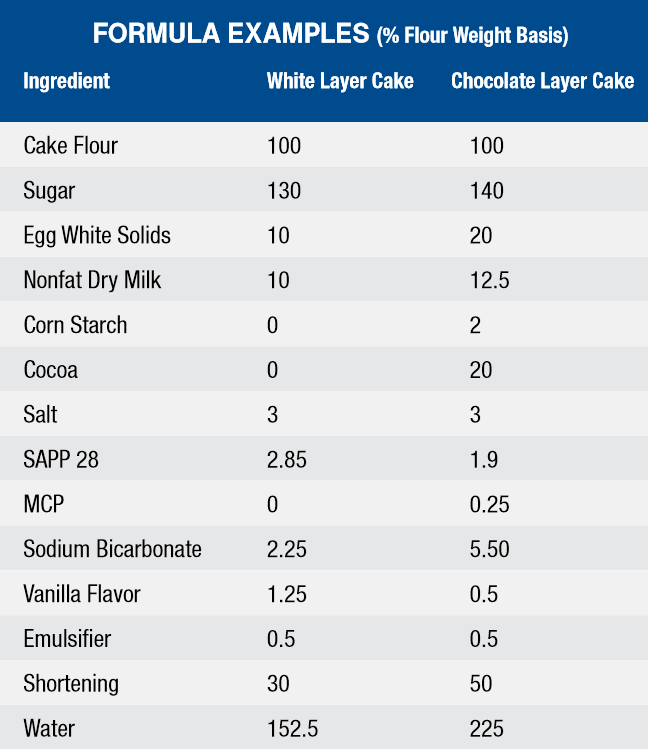