Biscuits (a chemically leavened bread) are unique to the United States. Many of these products are made from self rising flour, which is a mixture of flour, bicarbonate, a leavening acid and salt. Shortening and water are added to this mix and the dough is sheeted, cut into biscuits and baked. The use of chemical leavening yields a product with a thin cell wall and an even, open grain.

Refrigerated biscuit doughs, a variation of the chemically leavened biscuit, are mixed, sheeted, cut and then placed in a can. The can, which is a foil-lined cardboard container, is sealed and placed in a proof box to raise the dough temperature and thus trigger the leavening reaction. As the biscuits expand, they drive out the air trapped in the can. The can is sealed by the dough and the generated pressure maintains an environment which stabilizes the product. Refrigerated dough biscuits have an average shelf life of 90 days. The leavening reaction rate is very critical in the production of refrigerated biscuits. It must be relatively inactive during dough makeup but also must perform 100% of its action in the short proofing time.

Bicarbonate particle size will vary depending on the type of biscuit produced. Biscuit mixes require a fine particle size to enable bicarbonate to dissolve during the short mixing and processing time. If undissolved particles of bicarbonate remain in the dough prior to baking, yellowish brown specks will occur. Refrigerated biscuit doughs require a coarser granulation of bicarbonate in order to delay the solubilization and thus the leavening reaction rate.

Sodium Bicarbonate Grade 2 Fine Granular:
The narrow particle size distribution of Grade 2 facilitates rapid, uniform blending. This grade is recommended for those products where minimal leavening during mixing and holding is desired. It is also recommended for products to prevent or minimize pre-reaction during storage. 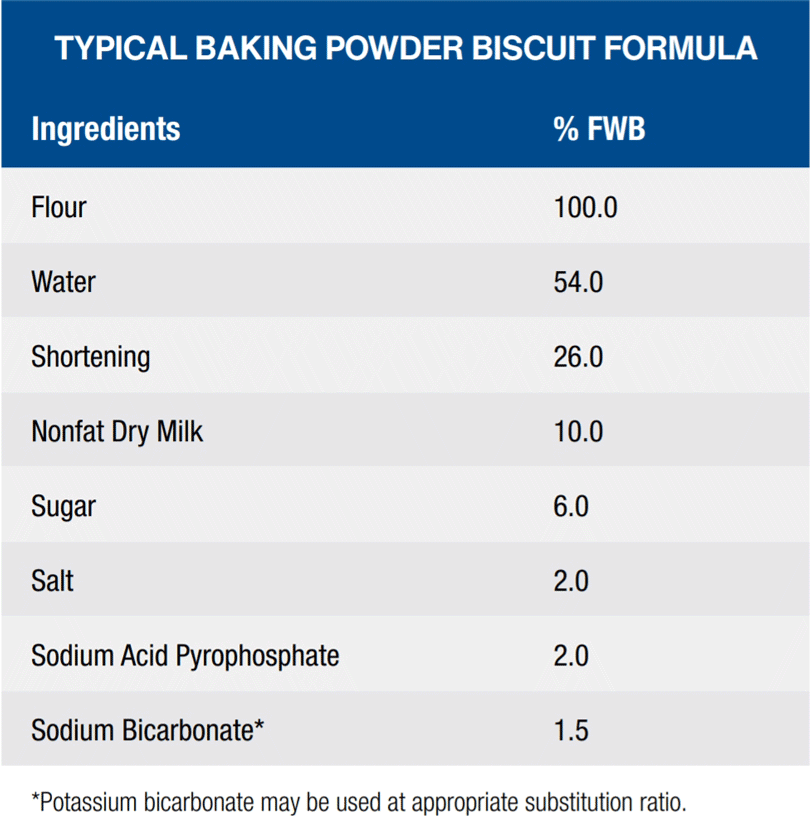